Home Prices: Single family homes starting in the low $400’s, averaging in the high $500’s but selling up to the millions in the upper Avenues, Federal Heights and the Harvard/Yale area. Condos sell in the $300’s for older studios, average in the $500’s with high end units located mostly at City Creek, the upper Avenues and at the mouth of Emigration Canyon. 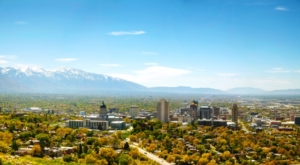 Salt Lake City is the capital and the most populous city of the U.S. state of Utah. The name of the city is often shortened to Salt Lake or SLC. When people say they are from ‘Salt Lake City’ they may not actually live in the City proper, but in one of the two dozen burbs (like ‘Murray, Sandy, West Valley, etc.). The Salt Lake Valley is a ‘bowl’ of sorts that is less than 20 miles long, bordered by mountains on the east and west. The City is at the north end of the valley, and the actual city runs from the Avenues to @2100 South and has less than 200,000 citizens. Salt Lake has many different neighborhoods with greatly varying price ranges and characteristics. The city also has an ever-expanding public transit program, a public Green-bike rental system, great city parks, and 8 library branches. Fiber internet is widely available and the main carriers are Xfinity and Google Fiber.

The city was founded in 1847 as Great Salt Lake City by a group of Mormon pioneers led by their prophet, Brigham Young, who fled hostility and violence in the Midwestern United States. They extensively irrigated and cultivated the arid valley and faced persecution from the U.S. government for their practice of polygamy, which was abandoned in 1890. Today, Salt Lake City is still home to the headquarters of The Church of Jesus Christ of Latter-day Saints (LDS, also known as the Mormon Church). Mining booms and the construction of the first transcontinental railroad initially brought economic growth, and the city was nicknamed the Crossroads of the West. Salt Lake City has since developed a strong outdoor recreation tourist industry based primarily on skiing. Salt Lake City was host to the 2002 Winter Olympics and is the industrial banking center of the United States.

Salt Lake is home to many museums and attractions:

Salt Lake City provides many venues for both professional and amateur theatre. The city attracts many traveling Broadway and off-Broadway performances which perform in the historic Capitol Theater and the new Eccles Theater where all he major Broadway touring shows perform. ‘Hamilton’ chose SLC as one of 10 U.S. cities to see the first run of the touring show mainly due to the instant sell out and respectful theater fans. Local professional acting companies include the Pioneer Theatre Company, Salt Lake Acting Company, and Plan-B Theatre Company. The Off Broadway Theatre, located in Salt Lake’s historic Clift Building, features comedy plays and Utah’s longest running improv comedy troupe, Laughing Stock.

Salt Lake City is the home of the Tabernacle Choir at Temple Square, founded in 1847. The Choir’s weekly program, called Music and the Spoken Word, is the longest-running continuous network broadcast in the world. Salt Lake City is also the home to the Utah Symphony Orchestra, which was founded in 1940 by Maurice Abravanel. The symphony hall, named after the conductor sits west of Temple Square and has a two story Chihuly glass sculpture in the lobby. Salt Lake City area is also home to an award winning children’s choir, The Salt Lake Children’s Choir. The University of Utah is home to two highly-ranked dance departments, the Ballet Department and the Department of Modern Dance. Professional dance companies in Salt Lake City include Ballet West, Rire Woodbury Dance Company and Repertory Dance Theatre. RWDC and RDT both call the Rose Wagner Theater home.

One of the most common questions about Utah is “What are the liquor laws like” and “is pot legal”?

Liquor: 5% ABV beer is now the maximum strength you can buy in grocery stores. Restaurants currently can pour you a drink starting at 11.30 a.m. during the weekday; and to 10.30 a.m. on Saturdays, Sundays, and state/federal holidays though – so you can have your brunch Mimosa or Bloody Mary an hour early during brunch. If you’re dining at a restaurant you can have any of the following combinations of drinks at once: one cocktail and a single 5% ABV beer; two 4% ABV beers, or a “flight” of beers in separate glasses, but totaling 16 ounces or less; A single 5% ABV beer and a 5 ounce glass of wine; one five-ounce glass of wine, or a wine flight in multiple glasses that doesn’t exceed 5 ounces, total; a five ounce glass of wine and a cocktail; a bottle of wine, which you pour into your own glass yourself after the initial five-ounce pour from your server;; If you have at least four people at your table, you can order a jeroboam, which is 1.5 liters. What you can’t have, is two separate cocktails at the same time. There are less than 50 liquor stores in the entire state, and they are not open Sundays and holidays. Profit (which are enormous and growing exponentially as the state’s population grows) go to fund schools.

Cannabis: A public referendum to legalize medical cannabis was on the Utah ballot in 2018 and passed. Utah was one of the first states to ban it in 1915 but legalized CBD oil in 2014, making it the first state to legalize only CBD oil without legalizing pot. The law regulates the number of dispensaries and that any cannabis product sold there must be grown in the state, creating shortages. There are half a dozen or so open medical cannabis pharmacies in Utah with another eight licensed and slated to open. Patients 18 and older, a parent or legal guardian of a minor patient, and designated caregivers may purchase medical cannabis. Each must have a medical cannabis card. Most people during a bud shortage will drive to West Wendover, Nevada (90 minutes) to their dispensary (also by a GREAT liquor outlet ‘Lee’s Discount Liquor) or to Dinosaur, Colorado. Gummies are usually readily available.