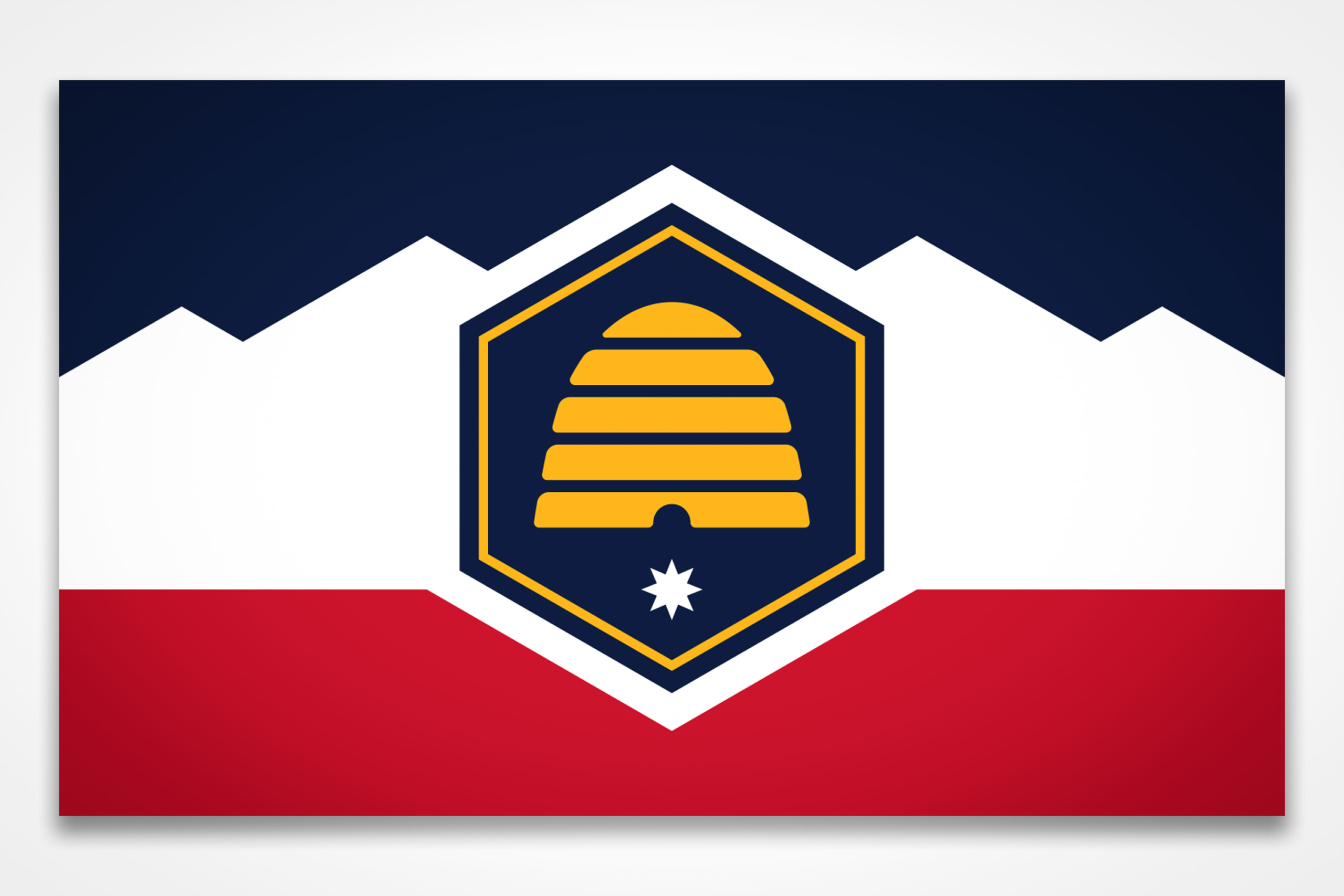 In a “Who’s winning this design battle”? the state of Utah has a finalist for it’s new state flag.  If you haven’t noticed, Salt Lake City got a new flag two years ago, made up of two horizontal bars of blue on the top and white on the bottom with a sego lily flower in the upper left side (canton/corner). We don’t see many sego lily flowers in the capitol city, but there is a giant concrete representation of one in Sugar House park that you can sit on if you walk in the south end of the park. The first city flag was created in 1963 and designed by J. Rulon Hales, the winner of a contest run by the Deseret News. The first version of it was made by Highland High students and it was officially put into use in 1969. It included seagulls, pioneers, a covered wagon, and the sun rising over the Wasatch. In the center was the beehive, our symbol of industry related to the founding of the city and its Mormon heritage. It was a busy flag and not a simple, ideal design in the world of flags.

In 2006 the second design of the city flag was adopted by the City Council after Mayor Rocky Anderson sponsored a design contest a few years earlier. Anderson, who’s announced he’s running for Salt Lake mayor again felt that “the old flag was too exclusive and focused entirely on the city’s Mormon heritage.”  This flag had a green horizontal bar on top, blue on the bottom, and a modern graphic rendition of the Salt Lake City skyline with snowcapped mountains in the background as a center oval. Not to be outdone, Mayor Mendenhall decided she wanted a  new flag and so the city government in 2020 opened a contest with a $3,000 prize for the winning entry. Six hundred people sent in their ideas and the final design was adopted by the city council October of the same year.

A commission met last month to advance their choice for a new Utah state flag, with three horizonal lines-the top a navy blue sky, the middle a representation of snowy mountains, a red bottom line to represent the red rock of southern Utah, with a beehive in the middle and a star underneath it (to represent the state’s Native American tribes). Over 44,000 citizens chimed in on designed ideas after state leaders criticized the current flag as “boring” and called it a “state seal on a blue bedsheet”. The Utah State Legislature in January 2023 will have to approve the new design.

One critic of the new flag told me the new flag design seemed appropriate: ‘Blue at the top of the state, red at the bottom, and white in the middle’ to represent the political factions within our borders. It was in 2011 that the current flag was adopted with the state seal over a navy blue background.