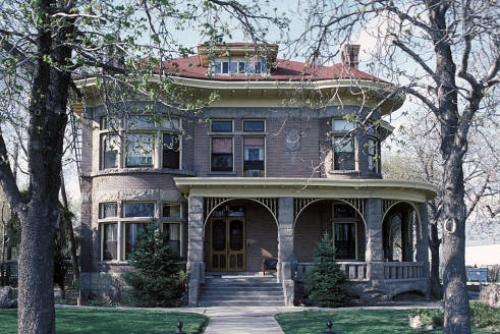 You’ve driven by the Fisher Mansion a million times if you’ve taken the freeway to the Airport from the east side heading north. It’s at 1206 West 200 South and if you’re the passenger in a car you can look to your immediate right as you weave from 1-15 to the west. It was designed by Richard Kletting, an influential architect from Utah who also designed the original Salt Palace, Saltair resort pavilion, the Utah State Capitol, the Territorial Insane Asylum, Lehi Tabernacle and many other buildings. It’s been sitting vacant for decades.

The two story, twelve-room mansion was constructed in the Victorian Eclectic style in a sparsely populated neighborhood near the banks of the Jordan River. Albert Fisher had immigrated to Utah from Germany and built this home near his place of work-the A. Fisher Brewing Company. The family beer business in Utah was brewing 75,000 barrels a year of suds with around 50 employees,  and provided the beverage to bars and taverns in Salt Lake County-many of which Fisher owned. His mansion showed off his success, and interestingly enough was the only beer brewery to re-open after the repeal of Prohibition. It closed in 1957. The mansion later was leased out to the Catholic Church for missionary sisters and then in 1970 became an alcohol and drug abuse treatment facility. It was later purchased by Salt Lake City in 2006.

The home sat vacant for several years as input from citizens was gathered as to the potential use of the building, as it’s got great bones with wonderful craftmanship. In 2020 the 5.7 earthquake damaged the building and all three chimneys, so in September of that year the City switched from attempts to update the mansion to focus on the carriage house there. Sadly, in the middle of the night that spring, someone stole most of the bronze metal fence surrounding the property that was most likely part of Kletting’s original design. The carriage house is now complete, with offices and a small public meeting room.

What’s great about all of this is the new boat ramp by the mansion that gives access to kayakers who want to explore the Jordan River in that area. Users say it’s the best boat ramp yet to be built along the trail. The other two ramps close by are located near the Utah State Fairpark at the Gadsby trailhead and one at 1800 North. Getting into the river now is much easier for people to access and there are more ramps planned for the future. The Jordan River flows from Utah Lake in Utah County to the Great Salt Lake and state, county and city planners and volunteers have been working for years to develop not just the Parkway along the river but the boat ramps. It’s really a great experience to boat during the fall, to leaf peep along the waterway and see nature first hand rather than through your car window. For more info on ramps: slc.gov/parks/Jordan-river-boat-access.