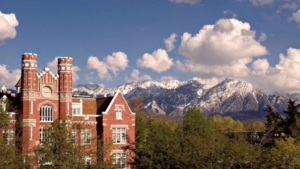 Westminster College is a private liberal arts college located in the Sugar House neighborhood of Salt Lake City, Utah. The college comprises four schools: the School of Arts and Sciences, the Bill and Vieve Gore School of Business, the School of Education, and the School of Nursing and Health Sciences. It is the only accredited liberal arts college in the state of Utah. The school was founded in 1875 as the Salt Lake Collegiate Institute, a prep school under the supervision of the First Presbyterian Church of Salt Lake City. At that time, members of many Protestant Christian denominations flocked to Salt Lake City in order to try to convert people who belonged to The Church of Jesus Christ of Latter-day Saints. Westminster is the only remaining vestige of a trend in the late 1800s in which the Protestants set up private primary and secondary schools and offered free tuition to children in order to try to convert them from Mormonism. College level classes were first offered in 1897 as Sheldon Jackson College. It was given that name after a Presbyterian minister and its primary benefactor, Sheldon Jackson. High school level classes ceased to be offered in 1945. Westminster severed its ties to the Presbyterian church in 1974. The college changed its name to “Westminster College” in 1902 to better reflect a more general Protestant education. The name is derived from the Westminster Confession of Faith, a Presbyterian confession of faith, which, in turn, was named for a London suburb where it was devised. Today, students from all religious persuasions (or none) are welcome and the school has not been affiliated with the Presbyterian Church since the church itself divested itself of all schools in the 1970’s.

Westminster College is the only private, non-denominational, comprehensive liberal arts college in Utah and one of the very few in the Intermountain West. A student-faculty ratio of 11:1 fosters a level of personal attention seldom found at other institutions. U.S. News & World Report has ranked Westminster in the top tier of colleges and universities in the Western U.S. for ten consecutive years, and ranks Westminster as one of the top three educational values in the region.
The neighborhoods near Westminster College include Harvard/Yale, Yalecrest and Sugar House proper. URBAN UTAH HOMES & ESTATES Broker, Babs De Lay, graduated 1976 and 1979 from Westminster and was given the “Distinguished Alumni of the Year” in 2011 and has produced the Vagina Monologues with the students and faculty every February for the past 20 years.

Westminster is in Sugar House prime, where there are brewpubs, local eateries, Whole Foods, animal adoptions (Best Friends) and little groovy shops just like the Hawthorne District in Portland.