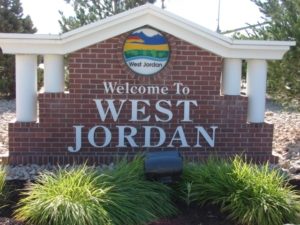 West Jordan is a rapidly growing suburb of Salt Lake City, with a mostly modern housing stock, quality commercial districts and a strong industrial base. The Jordan Landing mixed-use development, located in the major growth area of Salt Lake County, is the focal point of retail development and is one of the largest shopping centers in Utah of ‘big box’ stores. West Jordan has an estimated population of just under 120,000, placing it as the fourth most populated in the state. Named after the nearby Jordan River, the limits of the city begin on the river’s western bank and end in the eastern foothills of the Oquirrh Mountains, where Bingham Canyon Mine, the world’s largest man-made excavation, is located. Companies headquartered in West Jordan include Wasatch Software, Cyprus Credit Union, Mountain America Credit Union, Fairchild Semiconductor, and Dunford Bakeries. The city has one major hospital, Jordan Valley, and a campus of Salt Lake Community College.

City landmarks include Gardner Village, established in 1850 and the historic Sugar Factory, built in 1916. It is also the location of South Valley Regional Airport, formally known as “Salt Lake Airport #2”. The airport serves general aviation operations as well as a base for the Utah Army National Guard for Apache and Black Hawk helicopters.
West Jordan received its name from Mormon settlers who entered the Salt Lake Valley in 1847 under the leadership of their prophet, Brigham Young. These first European-Americans thought of the area to be their Zion, or Holy Land, and thus named the river flowing west of their first settlement, Salt Lake City, the Western Jordan, a nod to the River Jordan in Palestine. The name was later simplified to “Jordan River”.

One of the first sawmills in the area was built in 1850 in the city by Archibald Gardner. Archibald Gardner was a devout Mormon whose legacy can still be seen in modern West Jordan. His collection of now historic mills and houses have been renovated into a specialty shopping district known as Gardner Village. There is a farmer’s market held there every summer as well. www.gardnervilliage.com Old downtown West Jordan is being redeveloped for an expanded Main Park, a history museum, conversion of the Sugar Factory into a playhouse, an indoor recreation center, a senior center, and a large courthouse to serve the Utah State Third District.

The Jordan River trail runs through the city boundaries and the TRAX Red Line runs in the area. You can visit the Bingham Copper Mine at 9,000 above sea level-the largest open pit mine in the world. The views often mine layers as wells the mountains and Salt Lake Valley are breath taking. The visitor experience is open 8:30 AM to 3:00 pm, 7 days a week.