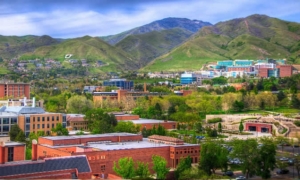 University of Utah area /neighborhood sits directly below the school. The school is referred to by locals as ‘The U’ or ‘The U of U’ and it is the arch rival of Brigham Young University in Provo, Utah in athletic competitions. The U is one of ten institutions that make up the Utah System of Higher Education and Utah’s premier research school currently enrolls over 32,000 students.

Originally established February 28, 1850 by Latter-day Saint leader Brigham Young who appointed Orson Spencer as the first president, it was initially named “University of Deseret”. The University was renamed University of Utah in 1894 and classes were first held on the present campus approximately two miles directly east of downtown Salt Lake City in 1900. Portions of the present campus are located on grounds formerly belonging to the U.S. Army’s Fort Douglas. The fort was officially closed on October 26, 1991, and although a small part of it remains as an Army Reserve post, the majority of its territory is now owned by the university, and occupied by student residences. It also has a very small and extremely historic cemetery with graves from the Civil War era and buried soldiers from a U.S./Utah Nazi prisoner of war camp. The university offers seventy-six undergraduate majors, over fifty-five minors and certificates and ninety-six major fields of studies at the graduate level. It draws its 30,000-plus student population from all fifty states and 111 foreign countries. The university, one of the state’s largest employers, has the only medical, social work, and architecture schools in a multi-state area. There are four hospital/ research centers in or surrounding the campus: Primary Children’s Hospital, the University of Utah Hospital, Shriners Hospital and the Huntsman Cancer Institute.

The U of U also has the amazing Red Butte Garden built in a canyon at the southeast part of campus and the Utah Museum of Natural History. Both are located on the Shoreline Trail where you can bike and hike along the foothills or ‘benches’ as they are called in Salt Lake. This green space has a variety of ecosystems and natural planting and is the place for the summer concert series each year. Locals love the outside music venue because of the great national touring acts and because you can sit on the lawns and eat your own picnic you brought, washed down by your own boozy beverages.

Places to eat: The U of U area is famous for The Pie Pizzeria, The Porcupine Grill, Cafe Trio, Rio Grande Café, and Hires Big H. There isn’t a commercial are by the U of U until you head downtown or south towards Foothill Village. The closetest kitschy area would be 9th and 9th, where you’d find the local art/cinema ‘The Tower’, the gay greeting card store ‘Cahoots’, local coffee ‘Coffee Garden’ and several local eateries. There is a farmer’s market on campus on Tanner Plaza Thursdays 10-2 late August through early October.