Home prices are in the low $300’s and average in the high $400’s but can go into the $800’s for larger newer homes. There are many condominium projects with many in the starter price ranges. 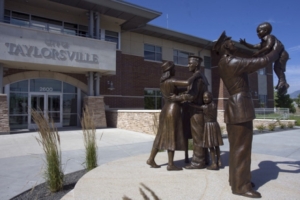 The area called Taylorsville today is made up of three historic communities in the central part of SaltLake County: Taylorsville, Bennion, and Kearns. Taylorsville, Bennion, and part of Kearns became the City of Taylorsville during the centennial anniversary of Utah statehood, 1996. The first (unnamed) people in the region appeared during or after the last ice age on the shores of what remained of Lake Bonneville. Less than five miles from Taylorsville evidence of people killing and eating a mammoth have been found. Some of this region’s first named visitors were Fremont people who used the area to hunt and gather food along the Jordan River more than a thousand years ago. Most of the area was dry sagebrush-covered land without any natural water sources except the Jordan River. A well-used Ute trail wound along the west side of the river at approximately 1300 West which the Ute used in spring and fall. Early settlers observed small encampments of Ute in the cottonwoods along the Jordan River. At least one local settler called these people the “Yo-No'”.

The first Mormon pioneer settlers, Joseph and Susanna Harker from England built a log cabin on the west side of the Jordan River in November 1848 on what was called then “the Church Farm” near 3300 South. In 1849 Samuel and John Bennion and several other families moved south crossing the river on the ice in January. There was little in the way of building materials, so the families dug into the bluffs of the Jordan River for shelter.

In the 1853 the continued threat of attack by angry Utes, locally called the “Walker War” or the “Utah Valley War”, forced the settlers to build a 2-acre adobe fort called the English Fort just north of the North Jordan Burying Ground in 1854. Two railroads were important to Taylorsville, the Rio Grande and Western to Bingham Junction (Midvale) and the Bingham-Garfield Railroad was added through the area in 1910.

In World War II 75 men from Taylorsville served and two lost their lives overseas. After the attack on Pearl Harbor in December 1941, the US Army Air Corps wanted an isolated place to build a training base safe from any attacks by the Japanese and on the main rail routes to the Pacific Coast. The War Department bought 5,000 acres (20 km2) of dry farmland in the western part of Salt Lake Valley. Camp Kearns went through renamings as the focus and mission of the base changed, Camp Kearns was the name which stuck. It opened in 1942, but took about a year to gain its final size. The base was named for Senator Thomas Kearns of Utah who had made his fortune in the silver mines at Park City. Just a year later Camp Kearns had 40,000 residents and was Utah’s third largest city at the time. It served as a basic training facility for replacement troops headed for the war against Japan. Camp Kearns included a huge 600 target practice range, the largest in the US, a difficult, mile-long obstacle course, a grenade practice ground, and barracks for thousands of men on their way to the Pacific coast. The motor pool hired more than eighty local women just to drive trucks, in all about 1200 civilians worked at the base as any given time. Camp Kearns had the largest hospital in Utah at the time which spread into ten buildings. The second mission of Camp Kearns was a practice air force base for Army Air Corps ground crews. In time technical training of air force ground crews became Camp Kearns main objective. This included many kinds of schools: navigation, intelligence, radio, teletype, clerical and many others.

The base was dusty, hot in summer and cold in winter. Men who trained there thought it was an awful place to live. They stayed in the long tar paper-covered wooden sheds heated with pot-bellied stoves and lighted with a few light bulbs. Each barrack was home to sixty men sleeping in squeaky metal beds with thin mattresses and not enough blankets in the winter and poor ventilation in the summer. Most of the men who trained at Camp Kearns stayed only a few weeks and were glad to roll away from it on a train to California. Despite the boost to the local economy, Salt Lake and the surrounding communities did not appreciate the huge military presence and tried to limit soldiers to the area around the base. African-American soldiers were segregated both on and off base. As the war drew to a close, the base began a rapid decline. Vice-President Truman made an inspection visit in August 1944. The training functions were moved to California. Camp Kearns was closed as an active base in 1946, and the buildings and materials auctioned off in 1948.

Some people these days liken Taylorsville to the ‘Harvard/Yale’ of the west side for its quiet neighborhoods and some pockets of great mid-century modern homes. There is a good mix of older housing, new homes, condominium and rental projects. There are many small ethnic grocery stores and restaurants as well as every name brand eatery you could ever want in this area of the valley. There are several parks-Millrace and Valley Regional and an old school ‘nickelcade’ with family-friendly arcade games at 4160 S Redwood Road.