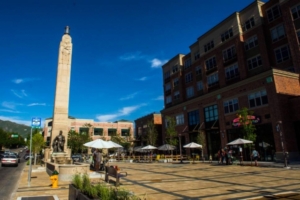 Sugar House is located roughly from about 700 East at its western edge to 2000 East at the east and 1300 South to about 2700 South north to south, and is largely within the boundaries of Salt Lake City.

Sugar House is considered by many to be one of Salt Lake’s most desirable and walkable neighborhoods in the entire Salt Lake Valley. The ‘heart’ of Sugar House is only 20 blocks to downtown Salt Lake City, the University of Utah or the mouth of Parleys Canyon (which leads to Park City). Sugar House is experiencing a lot of new development, both residential and commercial, making the area even more dense and walkable. In the summer there is a weekly farmer’s market in Fairmont Park where there is a public indoor pool, a skate park and green space for rugby or soccer and a duck pond. Sugar House is known for Westminster College, locally owned independent shops and popular bars and restaurants. The TRAX Sugar House street car line runs from Main Street to Fairmont Park and back and connects to TRAX, buses and Frontrunner trains.

History: Sugar House was officially established in 1853, six years after Brigham Young led the Mormon settlers into the valley. Despite its name, no commercial sugar production has ever been established in the area. The name came as a suggestion from Margaret McMeans Smoot, the wife of the mayor of Salt Lake City, Abraham O. Smoot, and was inspired by the sugar mill being built in the area at the time. The mill never produced more than unrefined molasses, due to problems with materials for the factory that never arrived from Arras, France, and the project was scrapped, leaving the area with its name but no sugar.

Sugar House Prison, the first Utah state prison, was located in Sugar House during the 19th century and early 20th century. The prison was closed in 1951 and all the buildings were torn down. The infamous Wobblie, Joe Hill was imprisoned and hanged there. After the demolition, the land was converted to the large and beautiful Sugar House Park and Highland High School.

During the early 20th century the corner of 1100 east and 2100 south was known as “furniture row” because three furniture stores were located there. However, economic reasons and the influx of big box stores and furniture chains has led to the demise of two of them. Only one, Sterling Furniture, remains after Rockwood Furniture closed its doors in 1999 then Granite Furniture in 2004, after more than 80 years of operation.