Home prices range from starter properties in the $400’s with some homes going for over a million on larger estates near one of the two temples of the Church of Jesus Christ of Latter-Day Saints. 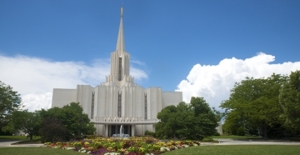 South Jordan (aka ‘SOJO’) is a city in south central Salt Lake County. Part of the Salt Lake City metropolitan area, the city lies in the Salt Lake Valley along the banks of the Jordan River between the 9,000-foot Oquirrh Mountains on the west and the 12,000-foot Wasatch Mountains on the east. The city has 3.5 miles of the Jordan River Parkway that contains fishing ponds, trails, parks, and natural habitats, the Salt Lake County fair grounds and equestrian park, 67-acre Oquirrh Lake, and 27 parks. It was founded in 1859 by Mormon settlers. South Jordan was the first municipality in the world to have two temples of The Church of Jesus Christ of Latter-day Saints (Jordan River Utah Temple and Oquirrh Mountain Utah Temple), it now shares that distinction with Provo, Utah. The city has two TRAX light rail stops, as well as one commuter rail stop on the Frontrunner to get to Ogden, Salt Lake and Utah County. South Jordan is a growing tech hub with headquarters of companies like IT software company Ivanti.

Kennecott Land, a subsidiary of Rio Tinto) has the master-planned “Daybreak Community” for the entire western half of South Jordan, which has virtually doubled South Jordan’s population in the past decade. Daybreak offers housing in virtually all price ranges, from apartment and townhome rentals to condos and stand-alone homes. Several builders have been selected to offer new homes in Daybreak, and build out time runs from 10-12 months for a new house. What’s very attractive about the Daybreak Community is that you live no more than five minutes from an amenity, such as paved trails, shopping, man-made lakes and a new lazy river, rec centers, pools, and bike lanes. The home designs were inspired by Salt Lake City’s historical neighborhoods such as Sugar House, The Avenues, and Harvard-Yale areas, and include large front porches and alley-loaded garages. Exterior styles include Colonial Revival, Craftsman and Victorian. They have brighter colors than are found in most suburban neighborhoods. Recently, homes with a more modern style have been added. The community is expected to continue building for the next 20 years as they own much of the land and water rights to the ‘benches’ or foothills of the west side of the Salt Lake Valley. When completed it will contain more than 20,000 homes and 10 million sq. ft of commercial space.