Homes are very scarce at Snowbird. Condos range from the high $400’s to the millions. The canyon itself has very few homes, so most people wanting to live near the ski resorts live in east Draper, Cottonwood Heights or Sandy. Snowbird does have timeshares and massive Airbnb’s as well as terrific year-round hotel/lodges. 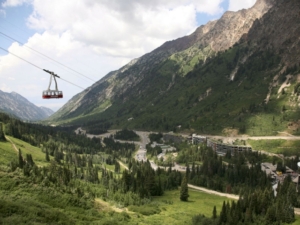 The two main ‘ski’ canyons on the Salt Lake City side are Little and Big Cottonwood canyons. The BIG resorts (Alta and Snowbird) are in LITTLE Cottonwood, and the small ones (Brighton and Solitude) are in BIG Cottonwood Canyon. Park City and Deer Valley are on the other side of that Wasatch mountain range, 17 minutes from Salt Lake City.

Before Little Cottonwood Canyon became popular with skiers, miners discovered deposits of silver ore within the glacial canyon. The history of Little Cottonwood Canyon and the town of Alta (there is no town of ‘Snowbird’ really) dates back to the 19th Century, when a soldier in the U.S. Army first prospected for silver in 1869. The tiny minerals he stumbled upon soon supported a massive industry. Little Cottonwood Canyon became one of the largest producers of silver ore in the Wasatch Mountains. Known as the Emma Mine and the namesake for the Big Emma run in Snowbird’s Gad Valley, the soldier’s find eventually produced more than $3.8 million in silver. At its peak, 8,000 people lived and worked in the narrow canyon, which held two smelters, 138 homes, hotels, boarding houses, a whore house, stores and even a railroad. The entire town was later destroyed by a series of avalanches.
Snowbird resort is a year-round ski and summer resort which first opened in December 1971. Ted Johnson, the one-time California beachcomber who founded Snowbird Ski and Summer Resort that elevated Utah’s winter sports image to world-class status, died January 29, 2018, in Santa Barbara, California. According to his son, Peter, Ted succumbed to injuries suffered when an allegedly drunk driver hit him in a crosswalk. He was 91. Dick Bass, a rich oilman and board member of Vail and Aspen ski resorts provided the initial financial muscle that allowed the ‘Bird’ to take flight. After three years Johnson sold his interest to Bass.

Snowbird shares the canyon with neighbor Alta Ski Area. Both receive over 500 inches of snowfall per year, with a single storm capable of producing over 100 inches due to ‘lake effect’ enhancement from the Great Salt Lake, making it the greatest area of snowfall in the mainland United States outside the Cascades. Unlike the humid and wet snow of the Cascades near the Pacific Ocean, Snowbird being in the arid Great Basin is known for its unusually dry and powdery snow.

Skiing at Snowbird usually closes on Memorial Day in late May while the occasional ski year can last as long as the Fourth of July. Snowbird has a skiable area of 2,500 acres with a vertical drop of 3,240 ft from the summit of Hidden Peak, which has an elevation of above 11,000 ft. Hidden Peak is serviced by an aerial tram from the lodges. Over the last few decades, Snowbird and most other Utah resorts have become ‘year round’ resorts offering hiking, biking, yurt camping/dining, tram/chairlift rides, alpine slides and zip lines, Oktoberfest, concerts and more.

Places to eat at ‘the Bird’: The Steak Pit, The Aerie, The Summit and Shallow Shaft.