Home Prices: There are few homes in this neighborhood, as it’s mostly populated with condominiums and apartment buildings as options. Prices for condos start in the low $300’s for a studio unit and as high as $1.4 million for a luxury penthouse. 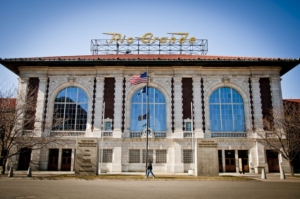 This area of downtown bordered by South Temple, 500 So, the I-15 freeway to State Street, with Pioneer Park centrally located. Rio Grande is home to many condos of which many are old converted warehouses which have been turned into urban lofts. This part of Salt Lake City is in the ‘Free Zone’ for TRAX and bus rides and is where Urban Utah Homes and Estates has always called home. This area has the Gateway Mall with movie theaters, the Planetarium, and Children’s Museum and is right across the street from Vivint Arena where the Utah Jazz basketball team plays. The two original Rio Grande and Union Pacific depots are in this area although no trains come and go from here. Instead, the main transportation hub is at 600 West and 200 South for Amtrak, Frontrunner and TRAX trains. The Depot and ‘The Complex’ are large concert venues in this neighborhood as well as Utah’s oldest gay bar, the Sun Trapp and the Metro show bar for local and national drag queen shows. The summer and winter farmers markets are held in Pioneer Park and the Rio Grande building. Rio Grande is also home to many independently owned restaurants, stores and businesses, including Urban Utah Homes and Estates, the Rose Establishment Coffee shop, Caputo’s Market and Deli and Pallet. It’s a destination area because the Vivant arena where the Utah Jazz play is right across the street from the Gateway Mall.

This area was for many years the site of one of two homeless shelters for Salt Lake City. By 2017 it became an area of over a two thousand unsheltered people living on the streets, and the drug dealers that preyed on them. ‘Operation Rio Grande’ was launched August 14th of that year and the area was temporarily washed clean of both humans, dealers and garbage. For two months multi-police units from the Highway patrol to SLCPD arrested and booked over 1,200 people for various misdemeanors or infractions. In 2020 the largest shelter was bulldozed, and developers bid for the land for high rise apartments.

Places to eat: The year-long Downtown Farmers Market is June-October at Pioneer Park and at the Rio Grande train station in winter. The station was damaged by the March 2020 earthquake and the market was moved to the Gateway until further notice. It is the largest such market in the state. Wiseguys Comedy Club and bar and is a nationally recognized venue at Gateway for national touring artists. ‘Bout Time is a small pub locals enjoy, and the Hong Kong Tea House specializes in Dim Sum and may be the only farm to table Chinese restaurant in the valley. They have a produce booth on Saturdays at the Farmer’s Market. Other places to eat are: Fleming’s Prime Steakhouse and Bar, Tucanos Brazilian Grill (‘meat on a stick’), Chedda Burger with homemade tater tots, Bruges Belgian Bistro (waffles), Chile-Tepin Mexican, Cucina Toscana, Pallet, Red Rock Brewing Co., Zest Kitchen and bar (vegetarian), Valter’s Osteria (high end Italian), Takashi, the Rose coffee shop, and Chunga’s Mexican. This area is where many well known downtown restaurants are located.