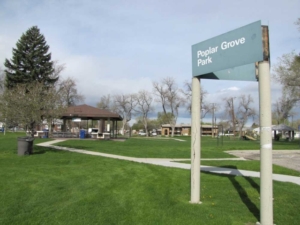 Poplar Grove is bordered by N Temple, 900 S, then I-15 to the 215. It got its name from a grove of trees the Edwin Rushton family planted in the area that became known as “Popular Grove” in the late 1800s. Poplar Grove is one of the most affordable neighborhoods near downtown. The neighborhood has great public transit, bike lanes and even the Jordan River Trail and several parks. Poplar Grove has some of the city’s best Mexican Food restaurants, a public library (Chapman), Neighborhood House for child and senior care and the LDS Welfare Square.

Popular neighborhood spots: Chunga’s for tacos al pastor (only after 11 AM), and the Red Iguana #2 (world renown mole). There is also La Diana Tortillas Y Panaderia a small bodega for fresh tortillas and pastries. There are two nice parks in the area-the 9th South River Park and Poplar Grove park (with tennis courts).