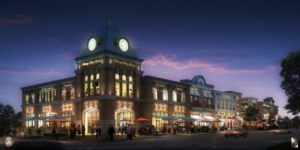 According to Wikipedia, on July 29, 1847 a group of pioneers (members of the Church of Jesus Christ of Latter-day Saints) known as the “Mississippi Company”, entered the Salt Lake Valley.

Within weeks after their arrival, they discovered a free-flowing, spring-fed stream, which they called Spring Creek (near what is now Kentucky Avenue). While most of the group returned to the main settlement in Great Salt Lake for the winter, two or three men built dugouts along this stream and wintered over. Thus, this became the first village established away from Great Salt Lake City itself. In the spring, a number of families hurried out to build homes and tame the land. There were numerous springs and ponds here and grasses and wild flowers were abundant, making this a most desirable area for settlement. When John Holladay was named as the branch president of the Church, the village took upon itself the name of Holladay’s Settlement or Holladay’s Burgh.

Another center of settlement is the area settled in the mid-1800s by Rasmus Knudsen, now known as “Knudsen’s Corner.” An 18 hole golf course was added in the last decade above Knudsen’s Corner, now called ‘the Old Mill’ – with beautiful and sweeping 360 views of the valley and mountains. In the 1960s the Cottonwood Mall was constructed in Holladay, and was Utah’s first enclosed shopping mall. The mall was closed down in 2007 after an ambitious plan to turn the mall into a European-style outdoor shopping village was announced. That company folded in the crash and the land sits vacant while new developers hold a year-long series of community and planning and zoning meetings to fine tune designs and ideas for the land use. The end result will be one of the largest mixed use projects on the east side of the valley in decades.

Housing in Holladay is a huge variety of condominium projects, ‘forever homes’ and large wooded estates where owners are still able to have horses and barns. This would not be an area where starter homes would be found.

Holladay is one of the more expensive places to live within the Salt Lake Valley and is a gateway to Utah’s most popular ski resorts. At the hot intersection of 2300 E and Murray Holladay Blvd, you’ll find some trendy restaurants and a Caputo’s Market and Deli. The best locally made garlic burgers can be found at a little beer bar in the area called ‘the Cotton Bottom Inn’ – one of Utah’s better local dives.