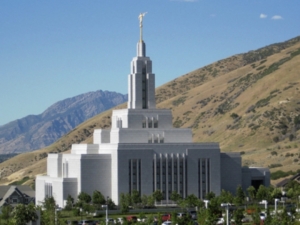 The housing inventory is diverse, from original farms to ‘McMansions’, starter condos to large housing subdivisions surrounding the South Mountain Golf Course. In the last decade new homes have been built up and over South Mountain and drop down into Alpine and Utah County.

Draper lies midway between Salt Lake City and Provo. Draper is bordered by Riverton and Bluffdale to the west, Sandy to the north and Highland to the south. Up until the 1980’s, Draper was a cozy pig and dairy farm area that was sold off and developed in the 1990’s and grew in the past few decades into a sprawling area of new stucco homes and big box stores. As of recent the Mayor and City Council have encouraged business to relocate in the city and have loosened zoning and height restrictions on new commercial construction. An LDS Temple opened in 2009 at the top of the hill above South Mountain Golf Course. There are horse trails, biking and hiking trails along the ‘benches’ into Corner Canyon.

Draper is home to Utah’s first and only IKEA store. Draper also houses the main customer service center for eBay, tech call center of PGP Corporation, the call center of Musician’s Friend and the headquarters for 1-800 Contacts.

TRAX Front Runner and Blue Line runs to Draper. What’s most important is that the main State Prison is currently located on the west side of the I-80 Freeway there and the State of Utah has announced the facility will be moving west of the main airport in Salt Lake City by 2022. That will free up substantial acreage that will go at top dollar to investors. Draper City and surrounding towns are holding massive public hearings on what the future should look like for this area with an emphasis on a commercial/residential mix of transit-oriented developments to serve the “Silicon Slopes” in the Salt Lake and Utah county valley.

Favorite spots to dine in Draper: Penny Ann’s Café and Goodwood BBQ. There are far more chain restaurants than local businesses in Draper.