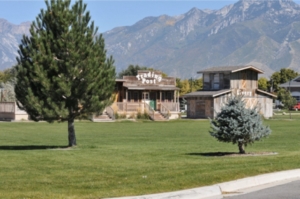 There are no condos in Bluffdale, but there are horse property zones for people who want to have a pasture and barn attached to their primary residence and yet be within a 30 minute drive to downtown Salt Lake City or a 20 minute drive to the ‘Silicon Slopes’ of Lehi/Provo, Utah.

Bluffdale is a city still in Salt Lake County, in the far southwest part of the Salt Lake Valley. It shares city borders with Herriman to the northwest, Riverton to the north, and Draper to the east. Homes in the area have much larger lots than many areas of the Valley and homeowners are often thought of by more urban Utahans as ‘farmers’ because much of the land is still zoned ‘Agricultural’ and allows for larger animals other than dogs, cats and chickens.

Bluffdale is also the home of the Apostolic United Brethren (AUB), a polygamous Mormon fundamentalist sect within the Latter Day Saint movement. The sect is not affiliated with the mainstream The Church of Jesus Christ of Latter-day Saints (LDS Church). Huge new housing developments are eating up more and more of the farmland in Bluffdale.